“Scientists want to see microbeads banned — and California is leading the way,” writes Eva Hershaw for VICE News on September 18, 2015. 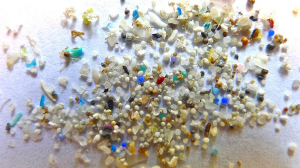 “In a recent report, researchers from seven institutions have estimated that every day, a whopping 808 trillion microbeads are washed down drains in the United States, while some 8 trillion microbeads are dumped into our waterways in effluent released from wastewater treatment plants,” she writes. “That is enough to cover more than 300 tennis courts daily. Once in aquatic environments, these microbeads, which are made of hydrocarbons, absorb pollutants and are often mistaken for fish eggs, zooplankton, or other forms of food by wildlife, which ingest them.”

Save the Earth, its climate, and those who dwell on it by donating here—every dollar counts (http://wwf.worldwildlife.org/goto/savethenarwhal)!

This entry was posted in Uncategorized. Bookmark the permalink.