Narwhals have been listed as “Nearly Threatened” since 2008. Very few laws have been proposed in attempts to protect this interesting species. In an effort to support conservation, the European Union established an import ban on tusks. Narwhals are becoming extinct for three main reasons. The primary catalyst for the series of events that have led to decrease narwhal populations is unprecedentedly rapid climate change.

Thousands of years of evolution have prepared an Arctic species like the narwhal for life on and around the sea ice. Because of climate change, this ice cover has dramatically decreased in both extent and thickness, at a rate far too quick for a species to adapt. A narwhal relies on sea ice for a place to feed and a place to take refuge—occasionally even a place to hide from predators. An additional result of climate change is the reduction in the population of the Narwhal’s primary prey, the Greenland halibut. 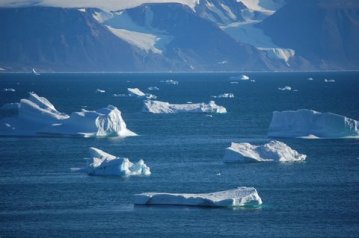 The Melting Ice Of The Arctic

Also encumbering rehabilitation efforts for the narwhal species is the increase in oil and gas development. The increased shipping of oil and gas has lead to increased vehicular movement in sensitive areas. In addition to the possibility of fatal oil spills, collisions between boats and many species of marine life are certain to occur. Also, shipping, marine construction and military activities cause an increase in noise pollution. Whales, as well as many other marine species, rely heavily on sound for communication. This new interference by noise pollution can negatively affect a narwhal’s ability to find food and mates, navigate, avoid predators and take care of their young. “Man-made noise affects sea creatures like putting a bucket on your head. It cuts off the senses they need to survive. When they can’t hear, they can’t live” (http://dontbeabuckethead.org).

Finally, hunting with modern equipment represents the most long-standing and consistent threat to narwhals throughout their habitat-range.

Feel Free To Watch This Video About The Unnecessary Endangerment Of The Beluga Whale And Narwhal!

The Human Involvement In The Endangerment Of Narwhals

19 responses to “Why Endangered?”